possibility of some 'left of field' soaring spots? 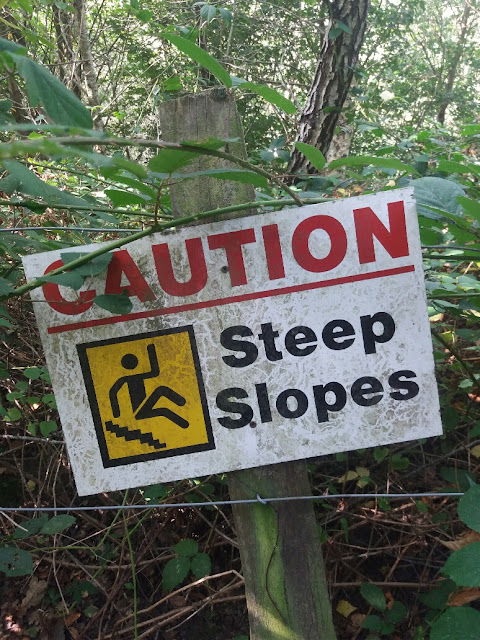 A little something to help combat that 'back to school' feeling....

Farthing Common is a capricious little slope; think Thurnham, but with even worse lift and far less of a landing area. However it does have its plus points.... I'll let you know once they come to mind!

But like most third rate hills, if you can get away in a thermal, you can make the most of the things. 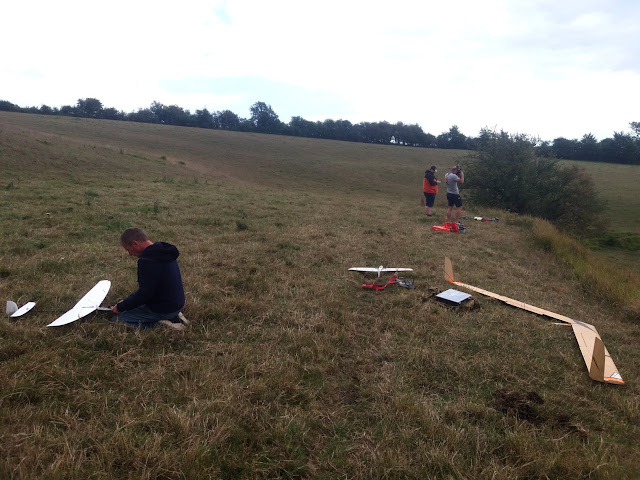 the FPV racing quad boyos are ripping it up.... manic flips, screaming passes 3 ft off the deck,
and high speed impacts with any nearest tree! 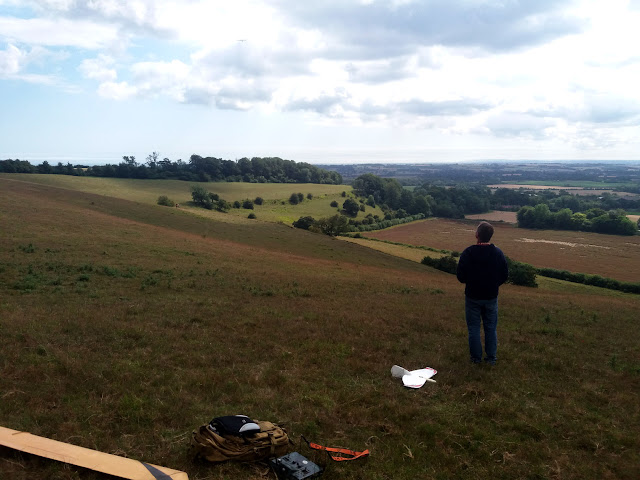 we retreat back up the slope, hungry for every bit of launch altitude it can offer 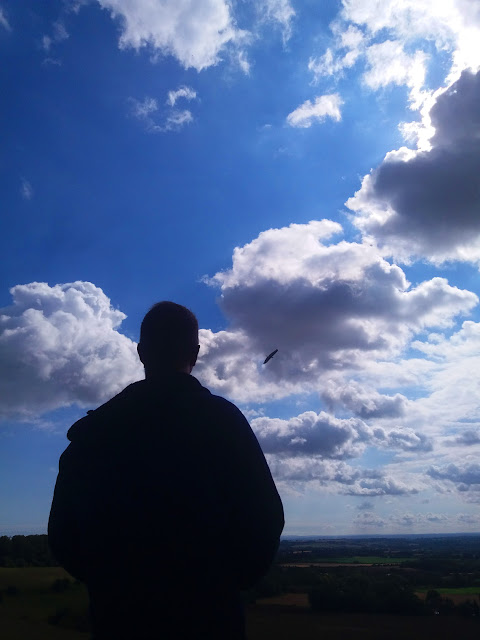 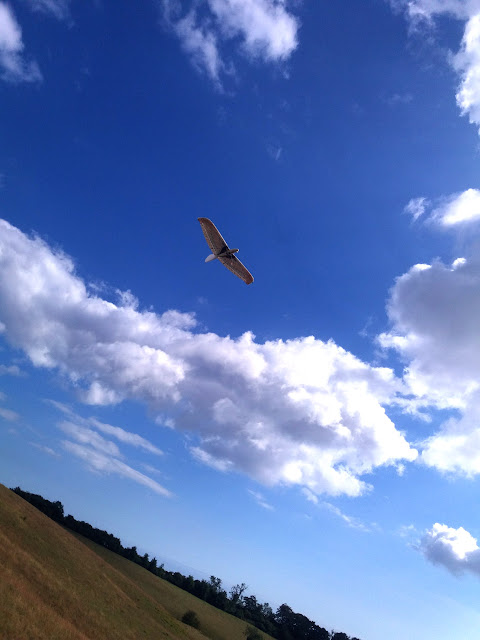 the Alula really is a unique design, since its introduction approximately
15 years ago, it has changed the face of slope soaring..... 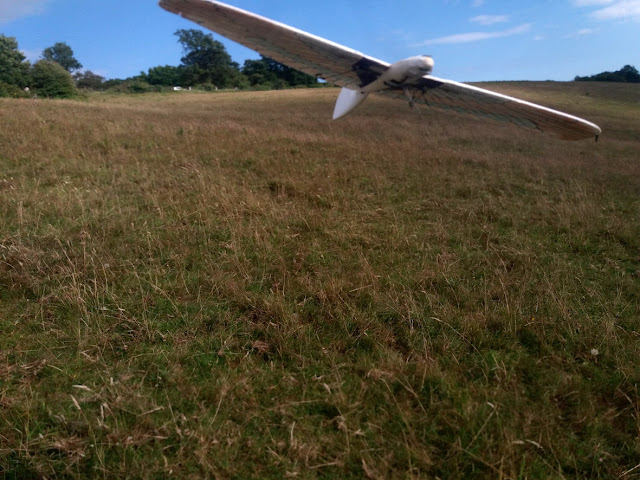 and here it is about to change the face of the cameraman! 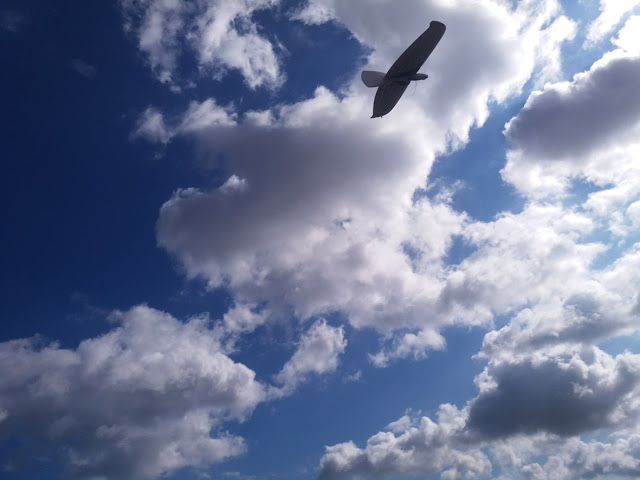 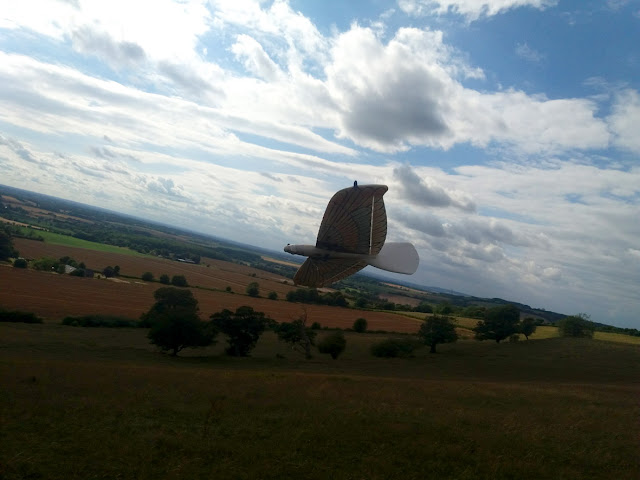 it's on the lookout for its next victim!

the merry month of May

Approx 3 months ago, a covert evening sortie to check out a previously unsoared incline. No wind, but holy f##k the cowslips!! 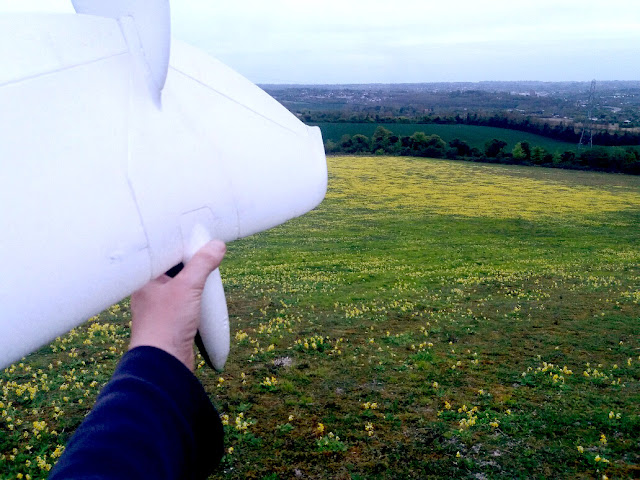 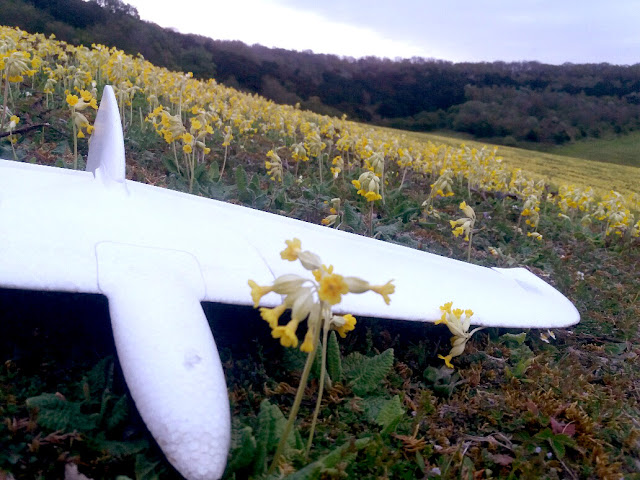 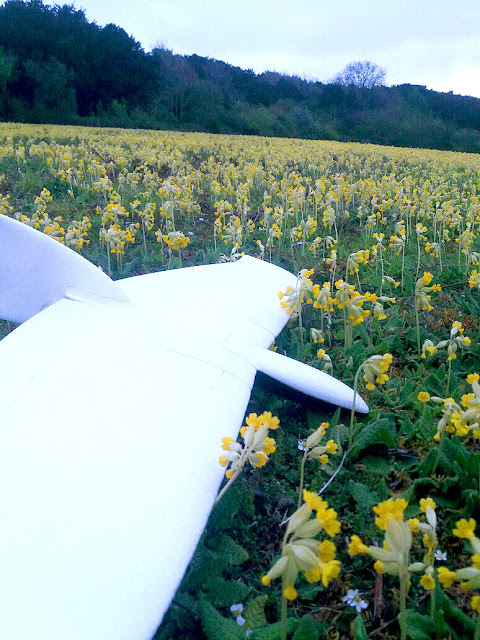 There are some hills that are utterly charming despite their diminutive stature, obligatory assent and compromised landing area. Today seemed like an ideal opportunity to have at it with one of them, and in the blustery pre-autumnal air a lovely bit of aviation was committed. 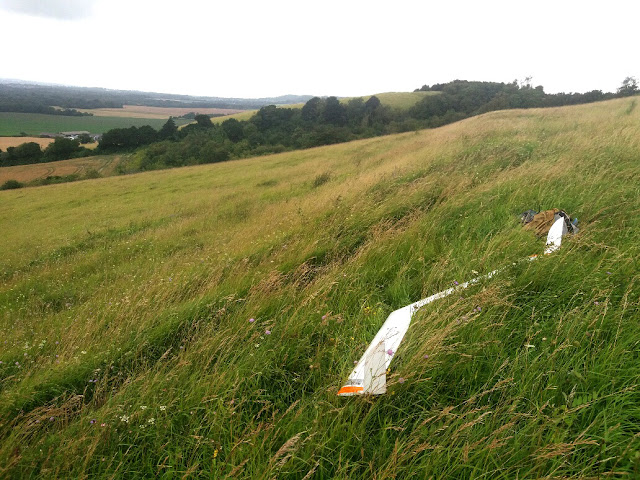 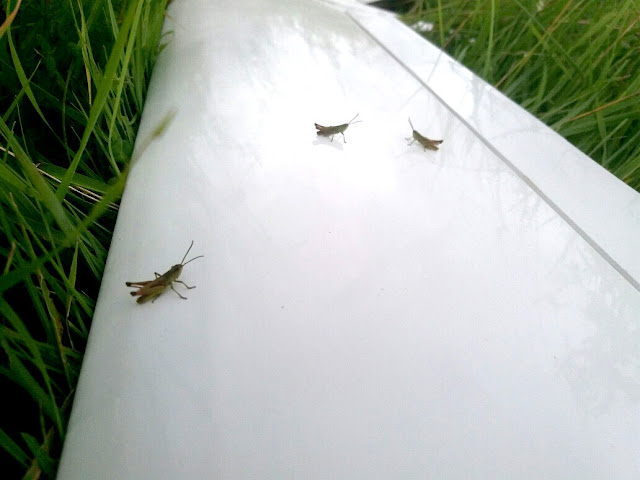 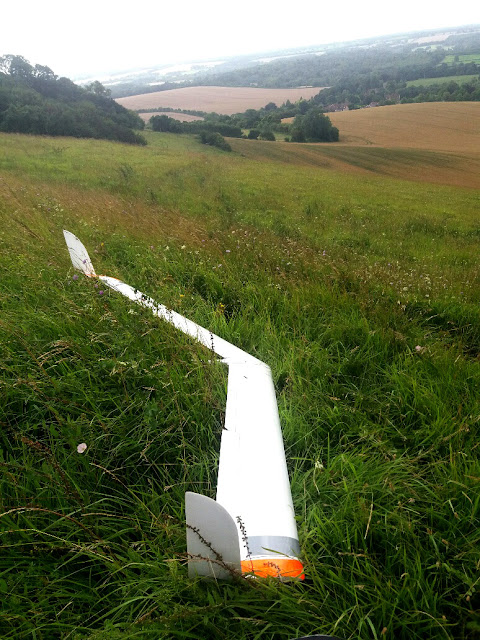 Edit-   Oh!.... and the Red Arrows did a flyover (too quick for the cameraman).
No comments:

Real live eagle spotted over the Downs last Friday. Most likely part of the reintroduction programme on the Isle of Wight. Data tracker was just about visible on its back.... local avian population weren't too happy with their visitor though!

High pressure dominates, and when it's south westerly, the paragliders dominate! 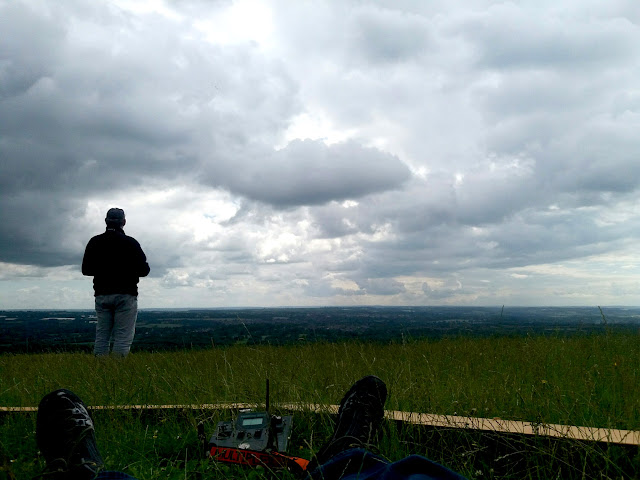 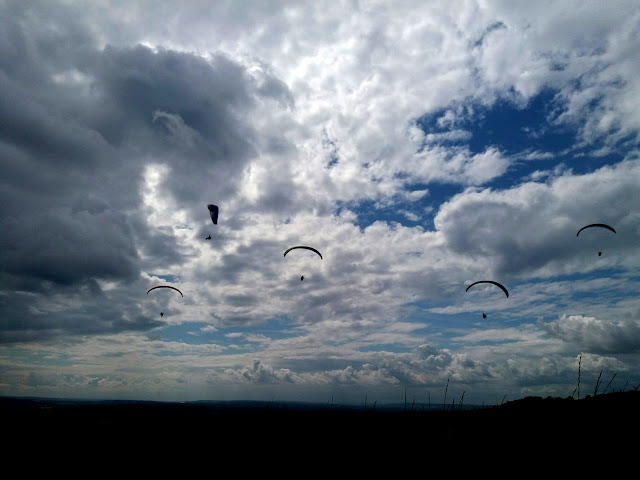 Well there's not been much in the way of gloriously flyable weather recently.
However, to break the monotony, Saturday provided us with a fine example
of aeronautical oddity as the Goodyear blimp graced the skies of Kent for the day.
After a lengthy stake out on the Downs by Team Goodwind, it became apparent that
the scheduled flight path was being adhered to in the most vague of fashions.
Therefore it was back to base for refreshments and a revised plan of attack....
Lo and behold there it was cruising along the horizon at the end of the graden! 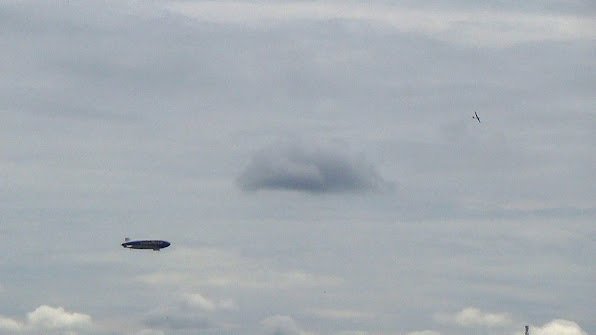 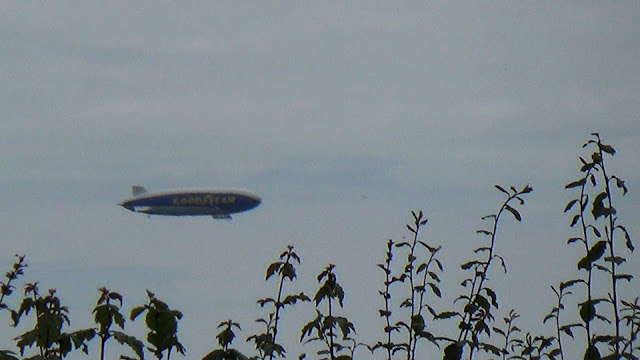 blimp vs. hawthorn (elevated anxiety levels right here)
There then followed another hour's worth of unsuccessfully chasing it towards Brands Hatch
(imagine an episode of 'Stormchasers' without the storms but with extra geekiness).
It was then back to base again to spend the rest of the day getting on with
something a bit more productive.... that is until Flight Tracker indicated it
was heading home to Calais.
So back on the road again.... only to head back to chez Goodwind once
we realised it was on a direct intersect with the GW hangar! 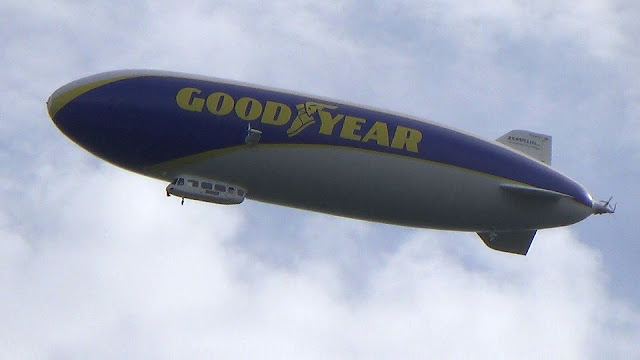 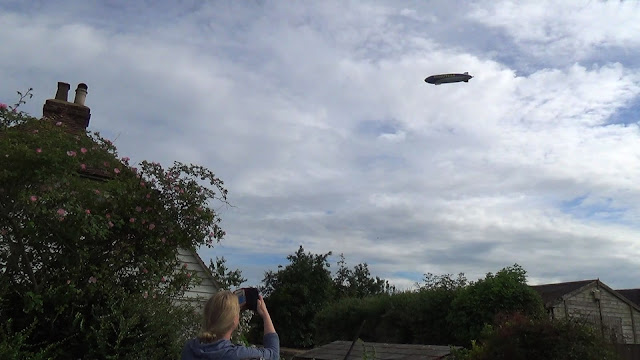 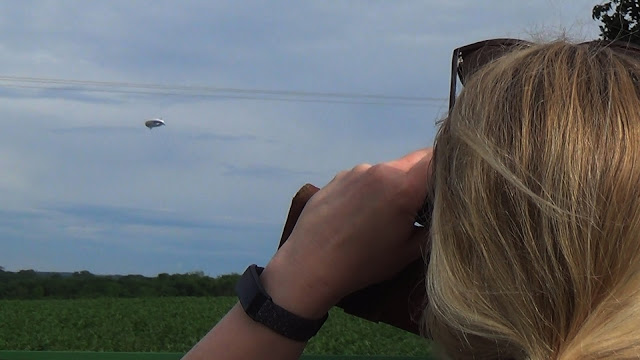 She'll be taking to the air again late tomorrow morning
(Tuesday 29th June, weather permitting) and heading for London,
and again on Wednesday. Best of luck and have your 'Eye Spy
Book of the Sky' at the ready!
track the route here
No comments:

Good to see evidence of more clearance work up at Holly Hill.

A lot of the trees and scrub at the top of the slope have been cut back and laid up in the remaining strip of  woodland. Access via the official footpath only.... not sure if this'll reduce the littering issue though! 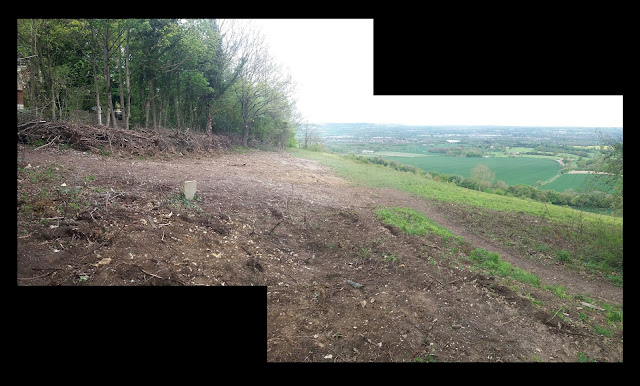 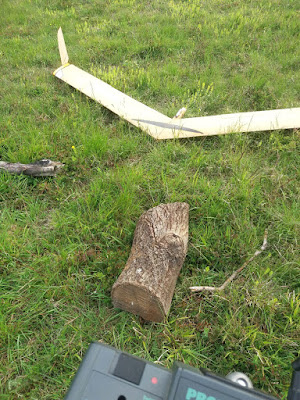 keep an eye out for nasties lurking in the LZ

goodwind
I eat, I sleep, I fly

how's the wind there?

who's on the hill?